We had recently communicated on the problems encountered on the major port congestion on the east coast of the United States.

Today it is the west coast ports that are in dire straits. With increasing demand day after day, limited capacity, cancellations of stopovers and changes in the rotation of services, this will create a congestion in American ports that could be unprecedented. Beyond the ports of Long Beach or Oakland, significant repercussions are being felt on Seattle and Vancouver.

To the ports of Long Beach or Oakland, freight levels for 40 dry equivalents should exceed 6,000 Usd very quickly to probably reach even higher levels in May and June. Indeed, covid-19 still very present on American soil is not helping the situation at all. The personnel of transport and handling companies is severely affected and the workforce is more than reduced in certain geographical areas.

Other factors, which are the basis of the positive news, are likely to intensify and worsen the situation, namely:

Congestion in all American ports, as well as in Europe, once again suggests intense pressure on maritime transport prices, and on the availability of space and equipment.

We remain on our initial indicators that we should not see any improvements until the end of June 2021. However, with the new elements appearing day after day, it is very likely that we will have to wait until the month of September to regain normality.

The situation is getting worse over the weeks for maritime transport on the France - US trade (East and West). With ever increasing demand and limited capacity, prices are soaring to reach $ 5,000 / 40 ’dry. The main shipowners who share 86% of the capacity from France to the USA will soon formalize soon their GRI announcement (General rate increase), which could reach $ 500 / TEU (amount given as an indication) for March and more for April.

Some shipowners are starting to implement a "Sea priority" surcharge which would be around 1000 Usd / 40 H.C in order to guarantee shipments.

Maritime transport still suffers from Covid -19 on American soil. A large number of American transport companies as well as handling companies have their workforce affected by covid-19 which induces a congestion of ships at the entrance of ports (waiting time at sea around 15 days)

Also, a minimum of 15 days are necessary before filling the containers with the terminals. We must also expect to see significant increases in delivery rates on American soil as well as an extension of lead times.

Depending on the evolution of the situation, whether in terms of availability of equipment than of ship space, it is probable that we will arrive at the situation we have experienced in Trade Import from Asia, to know a booking = a price.

Port congestion around the world foreshadow pressure on prices, space and equipment until the end of the first half of 2021

It is essential to anticipate as much as possible the exact volumes that will be shipped in order to limit congestion and to secure the vessel spaces.

We will have to be patient and more than ever anticipate reservations! Our teams remain at your disposal and available to support you as closely as possible. 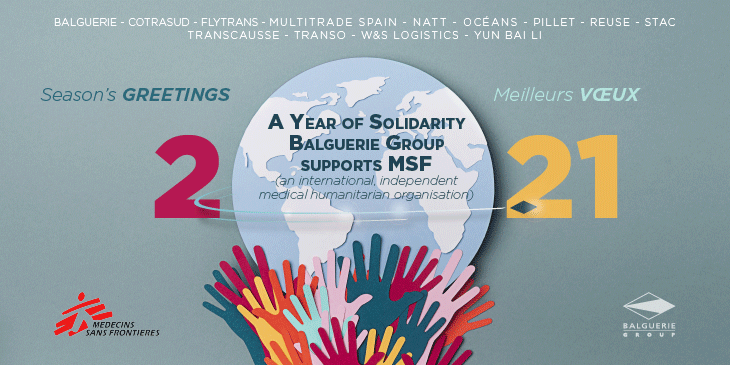 Due to the fast-approaching Chinese New Year and the Chinese government’s decision to quarantine the Feeder crews serving southern China, services will be suspended from 15/01 to 28/02.

We are all hit by PSS (Peak Season Overload) surcharges, equipment shortages or even supply reduction of air and maritime transport services. How did such an unprecedented situation arise?